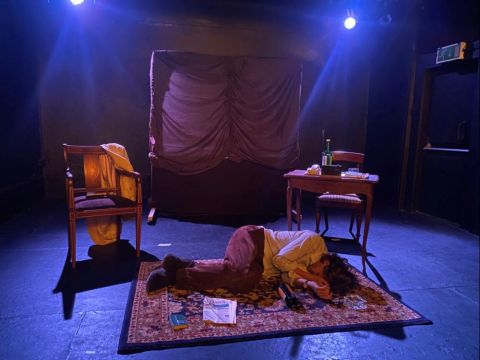 A few years ago, ‘My Dining Hell’ on the Edinburgh Fringe was an eloquent, entertaining show starring Jay Rayner, food critic for The Observer since 1999.  In his 1,100 words of ‘glittering prose’ each week, he derides unnecessary menu descriptions, "oven-roasted," "pan fried”; the best meal experienced? The Fat Duck Tasting Menu.

In ‘Out to Lunch’ Marcus Tuckwell (note the pun), the Restaurant critic for The Telegraph has just suffered the worst humiliation.  At the Food Writers' Awards Dinner, 'Giles Coren didn't say hello, Jay Rayner told me to piss off, Greg Wallace thought I was staff.’

We see him first in a collapsed state lying on the floor of his flat, surrounded by bottles of red wine and Laphroaig.  Feeling miserable, he then vents his frustration to his agent, Angie, by way of a song, peppered with gastronomic references - AA Gill and The Fat Duck, which happens to rhyme with a certain F-word.

Marcus is desperate to make a name for himself by winning the ‘Loiseau’ award for writing such a scathing review that the chef kills him or herself. In extremely poor taste, this fictional award is named after the real French chef, Bernard Loiseau, who achieved three Michelin stars. But in 2003, following a review of his restaurant, scoring 17/ 20, and a rumour that he could lose one Michelin star, Loiseau could not take the criticism and tragically committed suicide.

After the first of several slow, clunky scene changes, Marcus and Angie sit down at a red gingham draped restaurant table for lunch at Jezzers, meeting the fresh faced, anxious young chef.  From the first sip of the soup, this is an inspirational experience for Tuckwell – let the power play game between critic and chef begin.

Prancing around the stage, Fabian Bevan portrays Adrian as a rather pompous young man, with a hint of Hugh Grant-styled debonair dramatics.  He waxes lyrical about the joy of a leisurely boozy lunch - just a shame that the humour relies too much on expletives.  The jaunty, jazzy score is akin to Parisian café music and the witty song lyrics are best performed by Emily Cairns with perfect pitch, rhythm and panache.

This sardonic send-up of the literary art of restaurant reviews is a light-hearted farce for foodies - an amuse-bouche to tantalise the tastebuds before you go out to lunch.