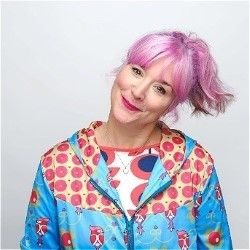 Lou Conran, your favourite aunt that tells all the dirtiest jokes, is back at the Edinburgh Fringe with A Show: she doesn’t need a niche; she is no holds barred, f***ing funny as hell.

Throw a 10-year-old-looking 14-year-old boy in the front row of a show that oozes absolute filth? Far from throwing her off, that’s a veritable playground for bawdy Lou, and she has the crowd gagging with laughter from her constant asides to the wee boy and to his cheeky dad for bringing him along to a show that runs the gamut of the NSFW content of which Lou is known to employ. She gives the boy a ticker to count how many expletives she drops, and he’s an enthusiastic participant in this at the delight of every adult in the room.

But, taking away the unexpected kid-addressing adlibs Conran is forced to (expertly) improvise; her actual show - what is it about? Anecdotes of her life in the pandemic, new love, body consciousness, work foibles and telly ambition, vaginas, shite and irritating cats…does it matter what she talks about? Short answer: no; her storytelling approach to comedy has her audience captivated on the edge of their seat with laughter, rolling nonstop with joke after joke told from Conran’s alternatingly brazen and honeyed voice and pool of accents.

A must-see every August, don’t miss Lou Conran and catch her in as many shows as you can get your hands on, namely as host of this year’s Late ‘n’ Live.

Age Suitability - edfringe.com says 16+ Guideline, but this should be taken as more of a restriction in practice!