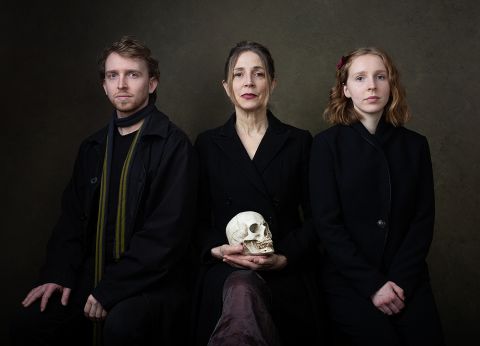 It’s 2am and three tired travellers, a mother and her two teenage children, arrive in a tempest at the Hotel Elsinore.

“Where’s your father?” she asks and finding that he is outside tells them to bring him in, “he’ll get wet”.  They return with a funeral urn.

They as a family are trying to come to terms with the death of renowned actor, Henry Elder, who was to be given the honour of opening the 30th Elsinore Shakespeare Festival with his celebrated Hamlet.

In true Shakespearean style he has written that “presentiment stalks me” and even death will not stand in his way as he has stipulated in the contract that they will give the performance.  To mother, Greta it is a chance to step out of his shadow and fend off destitution.  The children are less sure, not willing to be told what to do by a ghost and thinking it a boring vanity project, a “tour de farce”. But toured they have, and literally scarred, Hamlet is tattooed on their brains.

Greta is convinced if they start it will work out – it’s the magic of theatre. But something is rotten in the state of Denmark, mainly that she can’t get hold of a drink. Young Henry picks up his father’s mantle and pitches an edited version, putting Hamlet at the centre, a boy whose father has just died.

A faltering start becomes accomplished as hotel room beds are upended to become theatre flats and the action flows, but as the performers and characters intersect unresolved issues take the limelight.

The production is both a look at the cathartic power of drama and a love letter to theatre itself.   At its heart there is an edited but muscular Hamlet, and it could be abridged further to allow more development of the situation and the family issues.

The acting is strong, carrying the classic and allowing moments both humorous, with Greta’s leanings towards dipsomania and melodrama, and poignant.

For admirers of Hamlet, it is a palpable hit.