Ghosts of the Near Future, Summerhall, Review 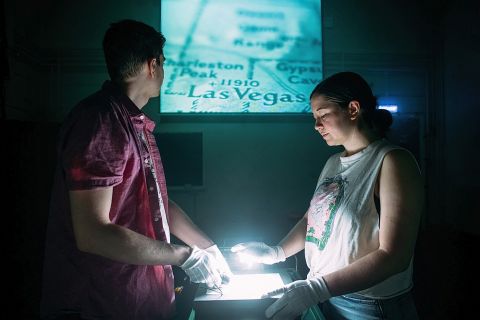 Removing the rabbit costume head he talks, almost stand-up style, about the recent death of his cat.  The cat knew the end was coming and sought out a place to go peacefully out of the world. There are existential questions about love and death but the only question that really matters right now is, if this is a magic trick, then where exactly is the magician?

Displayed on a backdrop screen a micro-camera sweeps across a sepia 1940’s map of Nevada, over the Ruby Mountains, Paradise, and Rabbit Hole.

In the desert just outside Las Vegas on a road cracked like the face of an old gasoline dealer a magician is shuffling a deck of cards, he is heading to Vegas to perform the greatest disappearing act the world has ever seen.

It’s a road trip that will see him meet a preacher proclaiming the end of the world while offering salvation, a nuclear physicist hunting cryptids, fearsome critters from lumberjack tales, “Splintercats, Whintossers, that sort of thing” and a showgirl who dances like the world is ending.

These are campfire tales in a dead country, a place of snapshots and mirages.

An intermission sees them eat hot dogs in front of a karaoke of Elton John’s Rocket Man with images of nuclear weapons testing.

Part theatre and part performance art with salt line roads and haunting images this is described as a “cowboy-noir fever dream about the end of the world and what happens next”.  Its look at extinction and magic has a nod to a lost bygone, perhaps easier, age while keeping one eye on these shifting times and an uncertain future.

The visuals, including the live conjured up micro landscapes are strong and the elegant language, circling and self-referencing, is lyrical while the pace offers moments of stillness on the “wild ride”.

It is an imaginative, deeply strange, and deeply lovely trip down the rabbit hole.