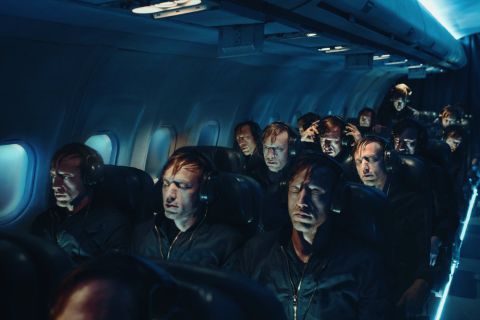 Billed as experimental theatre, Flight delivers more of a cheap thrill than a nuanced white-knuckler.

Known for their dark, binaural, immersive experiences set inside 40ft shipping containers, their other pieces (Seance, Eulogy), leave you feeling curious, a bit rattled, and blown away by the ingenuity and novelty, but with Flight, twisted tech theatre impressario DARKFIELD have soared a bit too close to the sun.

In what is loosely an exploration on quantum mechanics and Schrodinger’s Cat, Flight takes its passengers on a disturbing journey with one of two outcomes: crash or land. With the heat as of late, somehow, sitting in a middle airplane seat in a cramped shipping container creates a setting so uncomfortable that the flimsiness of the premise can’t win out, especially when drowned out by so much fear factor, seemingly for the sake of it. It feels as if, on this occasion, DARKFIELD has built from gimmick up, rather than around the theatre and meaning of the making.

With their other experiences, the metaphor and the (sometimes unsettling) psychological immersion usually find a balance, but with Flight, there is more shock value than substance.

Warnings and additional info: This show contains complete darkness. May not be suitable for those with claustrophobia or a fear of flying.