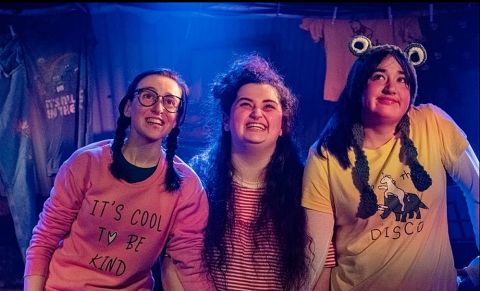 In a personal welcome the cast members chat with the audience. They are going to put on a show, or shows within a show, to tell the story of three sisters: Cassie (16), Tin (10) and Kit (7).

Precocious Tin starts with her TED talk on trinary star systems, in which she explains that two of the stars orbit each other while a third orbits the pair at a greater distance. One must be further away, or it would be thrown out of track. Together they are safe and never alone.

Safety and security are not things that have come easily, and Cassie feels the need to keep her siblings close. She has been acting as a surrogate mother for years, but when their mum disappears for longer than her usual absences, she can’t hide the fact from the Social Services.

Now they are with Mark and Alice, who have fostered other children in their tall house that smells of soap. It’s a land of comparative plenty with Netflix and exotic foodstuffs like couscous and smashed avocado, to the delight of the slightly food obsessed ingénue Kit. It’s a far cry from having to scrimp to keep the lights on. Still, Cassie warns them not to get too used to it as it’s only temporary.  The younger kids believe that their mum has simply gone on holiday, but Cassie knows differently and blames herself, determined to be the best mum and fix the broken family.

Cassie’s focus should be on an animation project because a summer school for media production could lead to bright lights, but she is slipping behind, always putting the needs of the kids before her own.

With the authorities now involved questions will be asked as to who is best placed to look after the younger children.  With Cassie (now 17) still a child herself in the eyes of the law can she offer what is needed?  Surely anyone who really loves them can look after them?

There is a pattern to their paths that will keep them safe.

It’s a production that draws the audience in with strong, captivating performances, an elegant stage set using stacked suitcases and washing lines which allow for projections and a good live soundtrack.

Very much in the style of the company and amongst its other work it would be at home in a system where 4.5 stars are a thing.