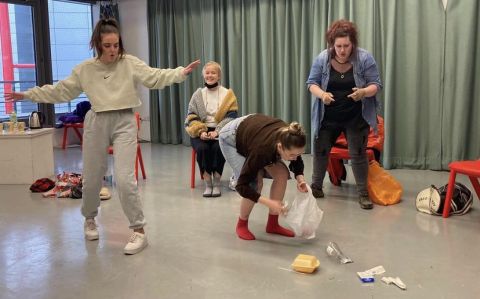 As a person with ADHD, I was intrigued by the concept of Buzzing Anonymous. A comedic interpretation of a support group for ADHD'ers, many of whom have co-morbidities such as Autism, OCD, depression and anxiety.

I waned back and forth over my review; some of it felt too on the nose for me. Both showcase common ADHD symptoms, but it felt like just a stereotype. Beth missed the entire meeting for what appeared to be the umpteenth time despite the fact it is always held at the same time, and at one point, I think every single person was fidgeting in some way.

Other moments, however, felt exactly perfect - when Stef's shared how life became so upside for her growing up with undiagnosed ADHD and being labelled as difficult and troublesome when she was just exhibiting her untreated symptoms.

Overall it was raw and real to the varying struggles of ADHDers, like executive function struggles, emotional regulation problems, the intense feeling of rejection.

However, that intensity was perfectly balanced with the other side of ADHD, perfectly modelled by the group joining in to support Thomas, who also has autism, shutting down and stimming by tapping his fingers to create the Doctor Who (his special interest) theme song.

Buzzing Anonymous gives a solid voice to many people struggling with ADHD and should be proud of the work that they're doing.