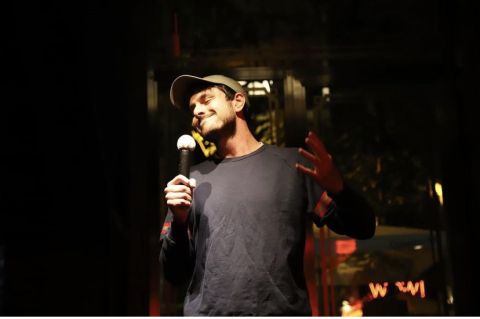 A show that lives up to its name if there ever was one, An Irish Disgrace, is 50 minutes of jokes that make you laugh out loud while secretly thinking to yourself, "Oh my god, did he actually say that!?"

Maybe not the show to bring your mother unless you have a very unique relationship. Some of his jokes were about his sex life (how proud he is of his ... abilities), pretending to be a "full gay" to get a free STD test in Berlin, and discovering the magic of topless beaches in Spain. I didn't count, but if I had, I'm sure he would have easily surpassed about 200 swear words in under an hour.

But if you're anything like me, his material will have you wiping away tears of laughter - especially when you hear about his ongoing feud with an Australian child called Rueben who wanted to be called Ruby.

Be warned: if you don't want Mike's attention, sit in the back, he loves to encourage (force?) audience participation. Sometimes you'll be in on the joke, and sometimes you'll be the butt of it, either way you'll laugh at it.