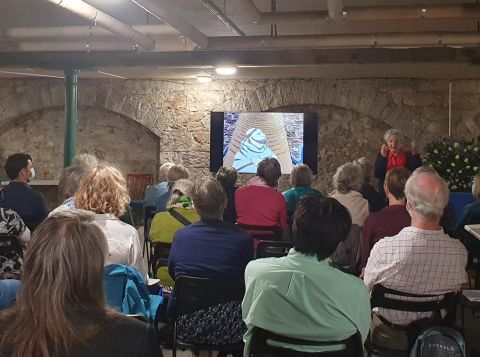 Led by Tracy A Franklin, a team of Broderers with Durham Cathedral have been industriously working through Covid to produce a brand new vestment. The cope, a cloak-like garment traditionally worn for church services, has been patterned on scenes reflecting the life of St Cuthbert, whose shrine lies within the Cathedral. When finished, the cope will eventually be displayed within the Cathedral’s new ‘Open Treasure’ exhibition.

Zoe van Zwanenberg, one of the team involved, gave a fascinating and highly sophisticated talk describing the process of making the item. Settled in the Undercroft of St Vincent’s Chapel, we were shown an array of slides taking us right through the process. From a sample of the sixteen sections needed, we first saw the images that inspired each panel. These then had to be translated into a design to make.

It had been already decided that the cope had to be entirely embroidered by hand. Close-up images of the applique design, followed by the subsequent steps required, left us in considerable awe at the time and talent the project required. Explanations of the relevant techniques for stitching and tapestry shading went alongside images showing further detail of the designs being worked. The intricate detail of the couching was particularly impressive – completely even, and all done without the aid of a measuring tape.

A time for Q&A followed the talk. We learned that one of the simpler panels was estimated to have taken 275 hours to complete. For all the stitchers involved, although spread across the country, it was yet a coming together for a common commitment; for some, a journey of meditation and contemplation too. The stitchers kept in contact through social media, and were able to share updates on the progress for the panels they were making.

This was a distinctly technical and unusual Fringe event – but it clearly attracted a niche group of people who might otherwise not have been reached.