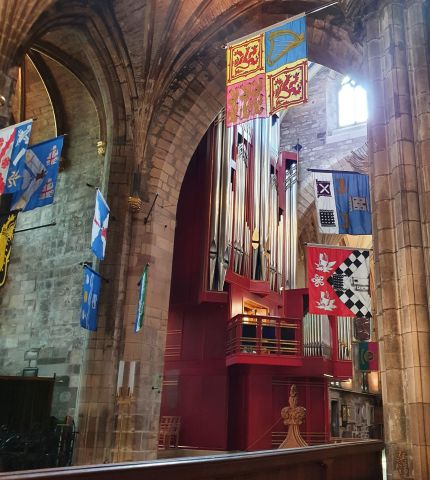 An uplifting conclusion to the ‘Organ Colours’ series of recitals on the acclaimed Rieger organ.

The concert opened with J.S. Bach’s ‘Prelude & Fugue in C minor’ – one of his early works, and often noted for its particular difficulty. This was an engaging beginning to the recital, though with all the other works coming from the last century. Anticipating the composer at the other end of the programme, Cochereau’s ‘Berceuse à la mémoire de Louis Vierne’ indeed had the tranquil and serene feel of a lullaby, its rhythm having a hypnotic quality. The concert was punctuated with English giving a brief introduction to the following work, and here with the Berceuse we were indeed enchanted by the alluring chromaticizations and key changes that English had highlighted for us.

From a brilliant improviser, we moved to one of the most important organist’s of the twentieth century. As with others, Howells looked backed to earlier English composers for inspiration, and ‘Master Tallis’ Testament’ was the very embodiment of this – essentially a set of gradual variations on an opening theme. It continued the feeling of warmth and colour from the preceding work, before we heard the beautifully registered ‘Evocation I’ by George Baker. This too looked back to earlier times for its inspiration, drawing on two plainsong hymn tunes associated with the Virgin Mary, moving from pedal solo to Cromorne.

The culmination of the performance was the Final from Louis Vierne’s virtuoustic Sixième Symphonie. It was a joy to hear, in all its unrestrained exuberance, from the invigorating opening theme, fortified by pedal ‘timpani’, to the cascading pedal scales at the climax.

Living up to its name, this recital certainly brought out some of the rich and varied colours of the Rieger organ. The size of the cathedral allowed for a fairly substantial attendance, even with social distancing. Proceeds were to go to the St Giles' Covid Recovery Fund. Given that current context, the earlier start time for an organ recital, and the shorter programme, seemed to be appreciated by a number who came, who were able to enjoy the performance before heading out for the evening.

The performance finished at 6.15pm.