Unicorns, Almost, Army @ the Fringe in Association with Summerhall, Review 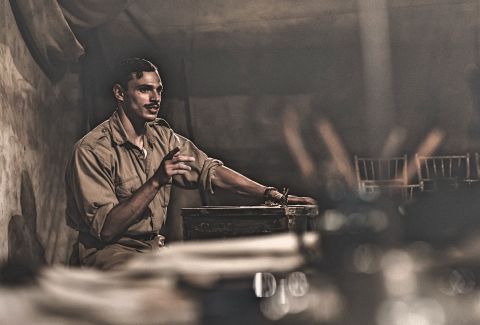 An atmospheric glimpse into the war years of poet Keith Douglas, this is a beautifully written and skilfully performed show. With a set and seating that firmly places the audience into the life of Douglas’s war, the scene is established quickly.

War poets are well known from WWI but Douglas is part of the lesser know WWII poets. What this show does is bring to life a warm, funny and vibrantly alive character: we get a real flavour of who Douglas was and what drove him in his writing. The clear and nuanced direction makes excellent use of the detailed set, with Dan Krikler’s Douglas a character that the audience can easily engage with.

Sound effects are used to great effect and there is a clear delineation of time changes. The occasional voiceovers of Douglas’ poetry and writing allow the audience time to focus purely on his words giving poignancy to the awareness of a life lost. This is a touching production that gets to the heart of Douglas and leaves the audience with a warm reminder of the power of words.