The Words are There, theSpace @ Surgeons Hall, Review 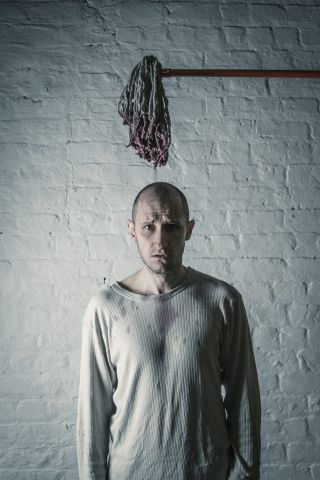 A glimpse into the less talked about struggle of men who experience domestic abuse from their female partners, this is a piece of physical theatre draws the audience in, slowly, and initially quietly. However, once the voiceover starts and the mass of words keep coming, it becomes an interesting battle for focus.

Trish, the female partner of Mick, is portrayed as a mop, slowly assembled and believable as the other half of this relationship. Ronan Dempsey brings a gentle earnestness and sensitivity to the abused Mick, slowly giving in to the actions of his partner despite the impact of her words and behaviour. Music flows between the bursts of voiceover which explain the onstage journey of the relationship. The abusive words – some of which come from reality TV – give a reflection of an uncomfortable but commonplace acceptance of that verbal abuse when people are competing for a prize: applied in this context the viciousness of those words is particularly clear.

The silence which appears at the beginning of the show gives strength in showing the clearness of Mick’s life pre-Trish. After this, although Dempsey only speaks three words within the play, there is constant sound. It feels like this show could benefit from further moments of silence to punctuate the piece, or to remind the audience that there is a different Mick somewhere inside, because there is power in that silence. The voiceover and constant music become distracting at times and by the end, there has been too much exhausting sound – but perhaps that is the point, that once Mick meets Trish, he has no moments of silence, none of his own quiet time left.

A thoughtful piece that leaves the audience contemplating.