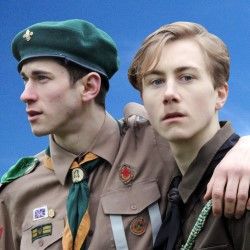 It is September 1938, and two boys from the Hitler Youth are billeted with Mrs Parrish as part of a Peace and Friendship tour organised by the Boy Scout movement. Welcomed by scouts Will Parrish and his friend Jacob, they are very keen to explore the English countryside. But why are they taking so many pictures?

Based on true events, The Good Scout is not so much a story about wartime mystery and intrigue, but about boys becoming men and long-hidden feelings coming into the open. The arrival of Gerhard and Friedrich, and the nature of their relationship, becomes a catalyst for Jacob and Will to re-examine their own friendship.

Gerhard and Friedrich are the better-developed characters in the story, with their contrasting appearances and manner narrowly avoiding the predictable stereotypes. Will and Jacob are less defined as individuals, partly because they look very similar and behave in similar ways.

The fictional action is occasionally interrupted by brief scenes depicting real historical events, but these are staged as moments of comic relief in flamboyant, high-camp style.

When a shady government official takes an interest in the youthful goings-on, the good scout has to decide who to trust. A poignant epilogue rounds off an engaging and well-acted piece of theatre.