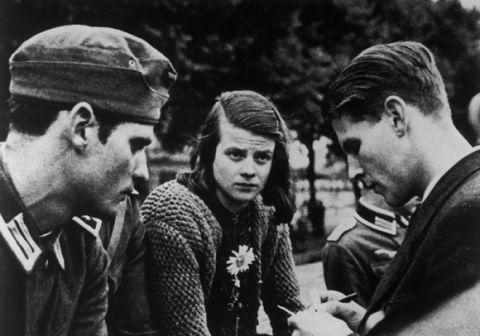 Looking at the resistance work of the White Rose group, composed of activists in Germany rebelling against Hitler, this is a poignant true tale of the sacrifice made by many. By the use of young people in this production, it serves as a reminder of just how young those involved were, including Munich University students and their professor.

John Knowles’ writing is lyrical and draws us in: “…everyone has a time, a moment that defines them,” stated in a strong performance from Marc Twinn as Hans Scholl, gives the audience food for thought. The storyline makes clear why these young people decide to rail against Hitler, even though it is dangerous for them. Knowles’s direction is clear and specific, allowing the text to tell its story effectively. The scene at the railway station is particularly effective, setting a tone and mood that gives a strong flavour of the time and the heightened emotion of the situation.

There is some variation in ability in the actors and at times voices are not as strong as they could have been, which means that some text is lost. Nonetheless, this is an engaging and sensitive look at a group who, during a challenging period of war, followed their beliefs in the face of adversity.