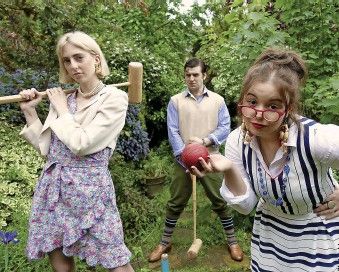 The setting is Sam and Philippa’s tidy, tranquil garden with the tweet of bird song on a hot summer afternoon, canvas chairs, picnic table, bottles of Bombay gin and Pimms ready for their guests, Kate and Howard.

Philippa sits immersed in an Anne Tyler novel while Sam stands polishing, caressing, a croquet ball as he admires his immaculate lawn …"smell it ..” he says to his wife proudly, “the groove of the green... like Lords Cricket ground.”

She treats her husband like a child, asking if he has taken his pill and put on sun screen. With his face smothered with a thick smear of Factor 30, like a clown’s makeup, the late Kate arrives, immaculately groomed, model slim, in a mauve dress and perfect accessories. With no apology for her tardiness, she says that according to “Woman’s Hour,” we say sorry even if people bump into us and that we are “pathological apologisers.”

And so we observe these middle class, middle-aged friends reminiscing about grouse shoots and outdoor country pursuits.  “Is croquet a sport or a pastime,” wonders Kate, “… played with a glass of gin in one’s hand?”

An hilarious practice lesson all gets rather steamy, finding the right position, legs apart to perfect the masterstroke with the shaft of the mallet to hit the ball through the hoop. But in the heat of the sun, there’s more than one score to settle before the game is over.   (A pertinent, amusing fact: in the 1850-60s, players in mixed doubles Croquet matches could hit opponents’ balls off the lawn, whereby young couples disappeared into the bushes in search.)

The young cast bring the characters refreshingly to life from page to stage with realistic flair - crisp and cool as the cucumber sliced for the cocktails.

The only quibble is that the storyline runs away with itself with a few loose ends to be tied and to create a neatly structured farce.