Learning from the Future, Dance Base, Review 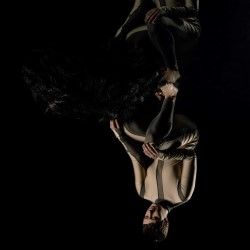 Learning from the future. On the day I watched this performance there was a technical hitch quite soon after the show started. It was halted and began were it had stopped 10 minutes later. You enter the stage with Leah Marojevic standing naked beside a white obelisk, redolent of the monolith encountered in Stanley Kubrick's '2001 A Space Odyssey'. Across the front of this is projected in a Sans Serif font 'I Was A Body'.

Whether the opening sound track is meant as a series of variations on car alarms, which is how it struck me, I am not certain it might have been part of the technical difficulties they encountered.

Ms Marojevic's focus and control is impressive, she moves, undulates, sways with a managed and concentrated effort. In the early stages of the performance issues of balance, spacial awareness and articulation all form part of the direction and momentum of the dance. The vocabulary of the choreography is taken from a narrow and precise spectrum. The piece balances between a concentrated framework or a contracted structure. In some instances I think this dilation of form can create a barrier to understanding and attention can falter. In the latter stages of the dance movement and expression widen and this challenge is left behind

You only get what you give in watching this dance, it requires attention and deliberate study by the audience to understand and engage with the intense concentration of the dancer and her delivery. I found this a challenging to piece to watch and despite the technical hitch it is clearly a strongly structured and finely honed piece of work.