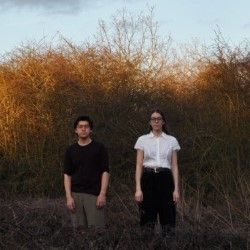 Landscape (1989) opens with the two performers singing the Official Song of the State of Oregon (Oregon, My Oregon) which starts quietly and builds through a crescendo to a rousing finale.

We need an explanation as to why we are in Oregon. Well, Francis Fukuyama wrote his essay “The End of History?”, in 1989, and the Wall came down, but it was in 1986 that the radiation from the explosion at Chernobyl contaminated all the mushrooms across Europe. That was when the forests of Oregon provided work and riches for thousands of mushroom-pickers from all over the world. And in the earth beneath them, a “humungous fungus” had grown for thousands of years from a microscopic spore to become the largest single organism on the planet.

After this introduction, the narrative, such as it is, disintegrates into a series of strange longueurs; there are protracted dance sequences performed with more energy than skill which lack any obvious motive. We watch a microwave count down the seconds of seven minutes, while a group of rotating mushrooms whirl next to it. Two hikers take an age to gather, prepare, cook and eat a pan of mushrooms.

All of this is, no doubt, very carefully considered; if Landscape (1989) is about anything at all, it seems to be trying to say something about time and nature. There is a reference to the composer John Cage, whose most famous work is the silent Four Minutes Thirty-Three seconds. He was also, apparently, a leading mushroom expert. Cage once said, “I have come to the conclusion that much can be learned about music by devoting oneself to the mushroom”, a sentiment which looks like the inspiration for Landscape (1989).

Sadly, this may all be very profound, but it does not make for great drama. Landscape (1989) is one of those Fringe pieces where you have to read the programme notes for any real clue as to what is going on, which is never a good sign. Even the most ardent fan of experimental theatre will struggle to find much of merit in the piece. At times, it has a quiet elegiac quality which may well touch some people at a very deep level. Others may find it a tedious piece of pretentious nonsense.