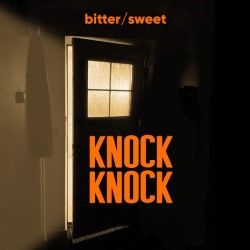 In three separate storylines, groups of people wait in dread for the knock on the door in the middle of the night. At least that appears to be the premise for Knock Knock. A gang of young villains struggles to hold it together after a robbery gone wrong, fretting over the fate of two missing members. A group of clubbers worry about the friend they poured into a taxi who has failed to make it home. And bored students at a party where all the action is going on somewhere else try to get a response out of a Ouija board; one knock for no, two knocks for yes.

As the action switches back and forth between each story, we start to wonder how each story will be work out. When the knocking finally comes, who will be at the door? The police or something worse?

Knock Knock gives a lot of small roles to a big cast. Everyone remembered their lines and said them at the right time, but the writing allowed little scope for much in the way of character development.

The expectation with this format of dramatic writing is that the storylines will perhaps converge at some point, or at least that they will exhibit interesting parallels. In the case of Knock Knock, each story remains separate and each also lacks a final scene, leaving the audience to imagine the various possible conclusions in each case. As the lights went down for the last time, it was only the solitary clapping of someone in the know that marked the end of the action.