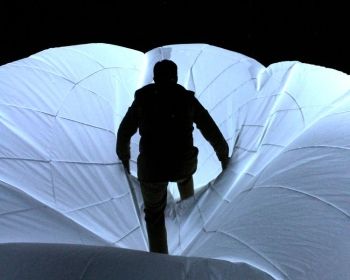 Let’s start at the beginning.

No, a starting point, as Inflatable Space has a number of beginnings.

Thaddeus Phillips hefts a large black canvas bag onto the stage. It’s heavy because it contains the universe.  Sitting in the audience he watches as the contents of the bag unfold, cocoon like, to fill the stage.

In 2027 he is planning a play explaining cosmological inflation, the theory of the exponential expansion of space after the Big Bang. Phone calls lead him to Howard Stevens (Ean Sheehy) at Jet Propulsion Laboratories, the project manager who officiated over the launch of the Voyager spacecraft in 1977.

1977, Frank Wolfe’s Beachside Motel, where Stevens gives a haphazard press conference over the noise of a Polish wedding in the adjoining function suite.  A once in 176-year alignment will allow Voyager to visit all four giant outer planets and then be slingshotted at a million miles per day out into the furthest interstellar reaches.

It carries a Golden Record, a greeting and a token of our sounds, science, images, music, thoughts and feelings to any extra-terrestrial life forms.

50 years later Stevens is still monitoring when contact with Voyager is lost.  Its significance is diminished, now cosmic tumbleweed – unless the Golden Record is discovered.

The time looping story is inventively told against cinematic projections on an inflatable “doughnut”, similar to the habitats once envisioned for moon colonisation. It encompasses space and the planets as a model Voyager sweeps past, accompanied by the Queen of the Night aria from Mozart’s The Magic Flute (from the Golden Record).  A further inflatable landscape provides Stevens his own starting spot, where he saw that we are all the stuff of stars.

For a piece about the cold immensity of space it is surprisingly warm as the two indulge in reflective conversation.  There are themes of legacy and the future and also what has been lost by not reaching out in this age of isolationism and walls.  A few of the lighter scenes don’t resonate fully and feel like time filling but overall it retains a sense of wonder.

Be glad that we have dreamers.