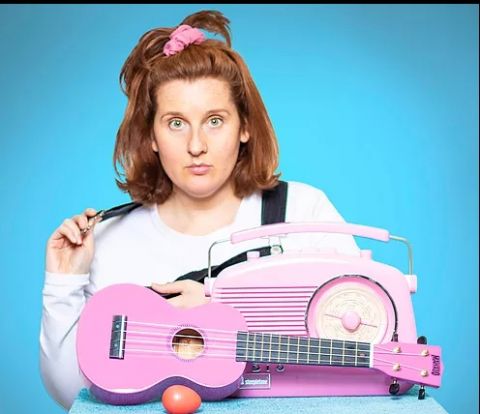 “Oh hello! Thanks for coming like, I’m not going to lie, I am slightly shitting myself”.  Well crap things happen and she is going to tell it like it is … including all the shit parts.

The story begins in the Summer of 2014, which was lovely – until she got cancer. It’s a life changing experience. Or it will be if she doesn’t die.

It doesn’t stop her getting out the ukulele and giving a chirpy rendition of “Dead By Christmas”.

She found her voice through mastering the ukulele, at least to some degree, and it helps to deal with the PTSD induced anxiety, depression, insomnia, OCD and FOMO.  Although finding her 25-year dead Nan in a glow-worm cave in New Zealand may strike a chord that there might be a departure from the norm.

She remains a bit vulnerable, and issues of body image and the trauma of online dating in London bring their own challenges. The darkest moments may also, weirdly, be the lightest. She survived beyond another Christmas.  How are things now?  Well she will tell you; honestly.

The show is a slickly performed and amusing look at overcoming the real trials and humiliations of dealing with a major disease.  It’s generously told with a cheeky warmth, modesty and, best of all, ukulele numbers. The insights provided are limited to loving our bodies and that it’s OK to be up and down, but it is more significant than the often #vacuous YouTube, Insta digital media content it alludes to.