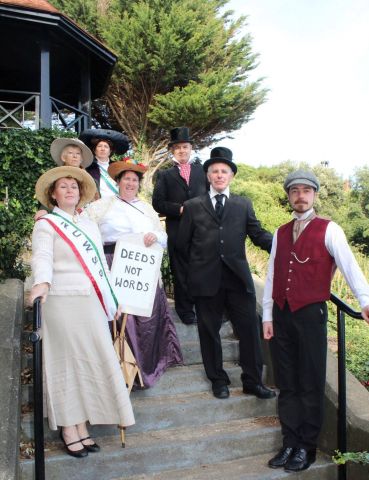 Managing to pack an astonishing amount of fascinating history into its 70 minutes, this show explains the history of the women’s movement and the split that brought about clear divides between suffragettes and suffragists. Through live music, storytelling and narration presented in an engaging way, Suzanne Hawkes’ writing brings to life a key time of change for women, highlighting the sacrifice that went into allowing women to vote and recognising their right to think for themselves.

The large cast make the most of the compact space available to them, managing to march and add live music into the mix, despite the challenging entrance spaces. The songs bring to life the feel of marching and the common goal for women: the right to vote, which is ultimately about the right to be seen as a human being with independent thought and capacity. The songs are, however, where some trimming could benefit the show, as not all of these drive the action forward.

The acting is not always connected and not all the cast make the most of engaging in eye contact with the audience. Humour is brought in however, especially by narration which manages to challenge female audience members at key points, effectively demonstrating the misogyny of the time period, but softened by the charm with which the point is delivered. Overall, the cast’s commitment to the storytelling is strong, and there is much humour sprinkled throughout the text, despite sometimes difficult testimony. You will leave this show, not only entertained but also much better informed about suffrage and the endurance of those involved.