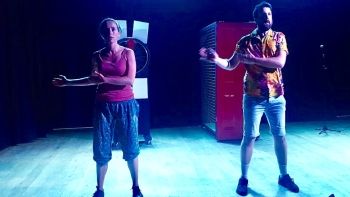 So we are told after audience members select from a number of boxes marked with names and containing outfits.  The result is that we have Dani, Seb, Mags, Lucy and Ben standing before us.

In games show style, a “volunteer” from the audience spins a wheel with a pointer to rest on The Queue. There ensues a physical piece resulting in a line, from which steps Lucy, taking us back to a day in May 2016 when she signed divorce papers and put a cross in a box on the “Brexit” referendum.  Proselytizing on independence, she expounds on putting unemployed British people to the front of the queue.

A further spin results in Broken Bones from conflict over Lucy’s boyfriend, a vegan with an addiction to fried chicken, who gets caught cheating, not with anything poultry, but flirting with twin sister Dani.

In Buzz, Ben’s seemingly ordinary day is constantly changed by a buzzer as he is required to revise every detail of his story, to his frustration, until a major incident refuses to be diverted.  The last volunteer has no real choice, but going through the motions selects Hands Off, a playful schoolyard with a darker element.

There is some overlap in these tales of struggle and of course they are shot through with the theme of fate and fortune.  It’s never clear how the audience’s interactions actually change things, but it ponders the effects of taking time to make conscious free choices.  The piece is said to be inspired by the Bear Pit area in Bristol, but that doesn’t come across and should be the source of more rousing material.

The game show element bridges physical theatre, monologues and some well-performed songs, resulting in some nice moments.  Too often, though, it feels like they have discovered a dressing up box and are not quite sure what to do with it.  There are some borrowed styles for which they don’t have the skills.

Interesting, but a bit random.