The End of Eddy, The Studio, EIF Review 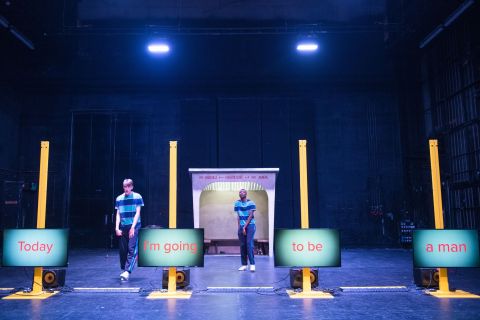 Growing up ‘visibly gay’, Eddy Bellegueule - or so he was called back then - in a working-class village in France, every day was a battle to ‘be a man’. In a town, like so many others, where beer-drinking, rough-housing and gay-bashing are the main credentials of this patriarchal role, many - like Eddy - have no choice but to educate themselves out of it. Based on Édouard Louis’s best selling autobiography, Pamela Carter and director Stewart Laing have created far more than an adaption with The End of Eddy

As if a staged book report, the world of Eddy is delved into before stepping back and looking more objectively his situation. Bullied through school for being a ‘poof’ and ‘a gay boy’, Eddy feels as if all hope is lost until he is fortunate enough to obtain an audition to study theatre far, far away from his horrid little hometown of Hallencourt. Playing the eponymous Eddy along with every other part, Alex Austin and Kwaku Mills perform with an unrelenting energy and true respect for the real Édouard’s story.

To the rear of Hyemi Shin’s minimalist design, a small town bus shelter - the perfect place for teenagers to hang out - yet it is the four screens downstage that steal the focus for most of the 80minutes. Incorporated into every scene as parents, friends, bullies or even bullet points, these simplistic designs by Finn Ross allow both the audience and the actor to abandon the traditional suspension of disbelief and be woken up and forced to be objective.

Although the original book is aimed at a more mature audience, Carter and Laing have done a wonderful job of making this piece more accessible to young adults around Eddy’s age. This does make many of the moments - especially sections of analysis feel a tad too spoon-fed for an adult audience.