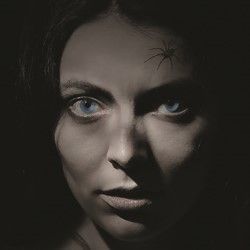 Four women accused of witchcraft are imprisoned in a cellar awaiting trial. Their situation is hopeless, their suffering excruciating and their fate inexorable. Can there be any kind of escape or resolution?

This is a drama where the characters are in a desperate plight at the outset, are then brutally tortured to extract confessions or betrayals, before a final horror unites them in a dark and grisly climax.

This is a very, very tough piece of theatre to experience. The action scenes are unremittingly grim and harrowing, and the dialogue is just as savage as the women tear into each other. Too much is perhaps is played at the same high pitch of emotional intensity. Anguish, wailing and despair dominate to the exclusion of all else and there is no room left for subtler tones.

Each of the four women is given a back story to explain how they have come to be here. One has known too much, one has strange powers of healing, one carries a fatherless child, one has known too many men. Each has been betrayed by three simple words – “She’s a witch!”.

The main problem with the piece is that there is not enough in the writing or the performances to allow each character to fully emerge as a distinct individual. This is partly because all the actors are around the same age and have similar voices . Even so, by the end we do care deeply about them as a group.

What happens at the end remains unclear, but the thin voice of hope left behind sounds hollow and perverse after so much misery.