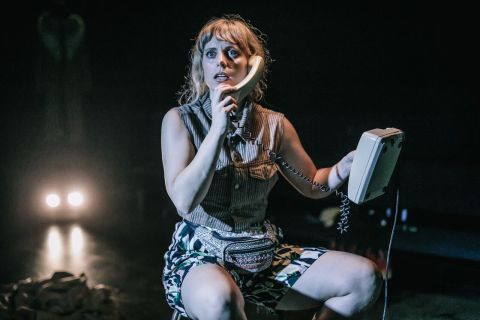 We are shut in a basement, seemingly unaccompanied by an actor, when out of the darkness comes an uncertain voice – “Hello, hello; is there anybody there?”.

“I know what I want … one large vegetarian, thin crust, no cheese”. This is a precursor of how this production will toy with the audience’s senses as it moves from light to dark.

Dancing to Kanye West’s “Fade”, throwing shapes in hard-core rebellion against the shadows, a young woman tries to make a dent on the hoarded contents of her late Grandma’s basement. She is playing games to make it less of a chore, solving puzzles in carefully folded newspapers and pulling random words from a classic French cookery book inscribed with “Happy Birthday Mum, please learn to cook”.

She sifts through items, putting on an old dressing gown and a scarf, the scent redolent of times past. Another gift was a cassette recorder, the inserted tape
a magazine programme on women’s liberation, interrupted by an advert for the latest fashion in ladies’ coats. The coat pocket offers up a tape and the voice of an old lady crackles back into existence.

She may be forgetful, but this is a story she can’t fail to recall, one of a lone car journey in the summer of 1971 on dark back country roads when she comes across … The tape ends.

But what did she see? Her granddaughter plays out good cop, bad cop looking for evidence and trying to take back control of the story. Things are getting weird, it’s almost as if her Grandmother is here, talking to her directly.

There were things she had never asked her grandmother but also things she never expected to hear. With the discovery of a second tape the tension rises, reality unravels and the plot takes that old stored rug and pulls it right out from under you.

The production is a mix tape of genres, jumping between them, continually swapping sides. It’s brave theatre than leaves an audience in darkness with just a recording. Reid’s masterful performance is naturalistic and believable no matter how otherworldly things get. The impressive sound and lighting take it roaring into a flickering dark crescendo.

A unique thrilling piece of theatre on the things we keep and secrets that can never be given away.