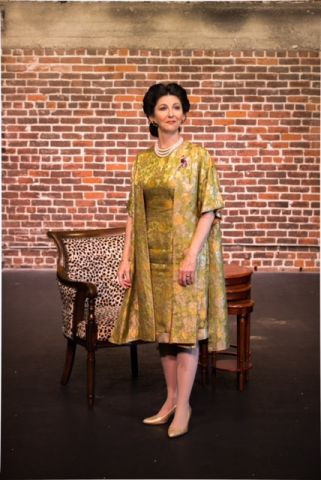 This is the World Premiere of a one woman play about the American socialite for whom Edward VIII gave up the throne to be with the woman he loved. Twice divorced, it was impossible at the time, 1936, for her to be welcomed into the Royal Family and be crowned Queen. As children sang in the playground, “Hark the herald angels sing, Mrs Simpson’s pinched our King.”

The stage is simply set with a blue velvet armchair, with family photographs and whisky (or more likely whiskey) decanter on side tables. Wallis stands dressed in a vintage gold brocade dress, draped with a matching jacket, pearls, brooch and her hair up in an elegant bun. The apartment is the Windsor Villa, Paris where in 1997 Princess Diana and Dodi came to stay (his father had bought the mansion), on their final vacation around Europe before their tragic deaths in a car crash.

We, the audience appear to be visiting her at a soiree where she will describe her childhood and marriages moving from Baltimore, Boston and California to exotic adventures in Asia. Her husbands were both alcoholics and domineering, but she sounds like a woman who can stand up to her rights and flirt her way to a life of leisure and luxury. Through a wealthy friend in London, she is introduced to David, the Prince of Wales, who is besotted by her – he loved everything American - as she is with his boyish, Peter Pan charm.

The anecdotes and memories of their long life in exile from the United Kingdom are told with dry-as-a-gin-martini, wisdom and wit. Her thick skin must have saved her from the barrage of cruel comments – known as That Woman! - from the Royal family. She learnt that the Queen Mother blamed her for the early death of George VI because, as a shy stuttering younger brother, he had never expected or wanted to be King.

The Duke and Duchess of Windsor may now be turning in their graves at the Frogmore cemetery, near Windsor. Over eighty years on since their marriage, social etiquette at the Palace has changed and in 2018, the divorced American actress, Megan Markle married Prince Harry to take on her new dramatic role as HRH The Duchess of Sussex.

The writer Scott Smith has clearly researched the life and times of Wallis Simpson with care and commitment to create a neatly dramatised biography. However, it would have been topical to add a footnote about Meghan who has been warmly welcomed into the Royal Family. Two love stories, two Duchesses both sharing a touch of Hollywood glitz and glamour, past and present.

In this charming portrait of Wallis Simpson, Melissa Jobe is a fine raconteur, capturing the period style and regal grace of the Duchess of Windsor, performed with cool, composed, operatic flair.