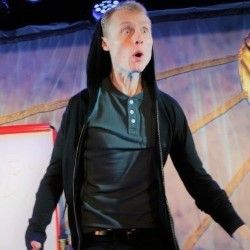 Samuel Clayton’s Statements is a masterclass in character performance, that deals delicately, yet unforgivingly, with the treatment and resources available for children with Special Educational Needs (SEN) in the UK. Poetic and punchy, with honesty at its core, this is a vital piece of theatre - especially for those who have the power to change things.

Statements gives a voice to three boys who suffer from different conditions, as well as allowing the parents, pals and professionals a chance to speak out too. In the plethora of characters Clayton dons throughout the fast-paced hour, we meet Chris. He has recently been assigned as a SEN co-ordinator to new boy Daniel who has Asperger’s. Despite not having any training - he feels like he is getting somewhere. Until he is re-assigned to Javeed, whom has only ever been home-schooled and has Down Syndrome. Finally we meet Toby. Constantly told to be quiet and keep his head down, he struggles to understand why when he’s so loud that no one seems to listen to him.

Clayton’s performance is outstanding from beginning to end, exuding undeniable passion and empathy to each role he takes on. Providing the children with a poetic style - allowing them to be heard in rhyming couplets - elevates the piece, almost providing these unheard voices with a language of their own.

Having spent an extensive amount of time working alongside children with SEN in primary schools, it is no surprise that Clayton’s writing is impeccably researched and handled with remarkable care. Although there have been numerous advancements since the 1980s, many of which have diluted the stigma surrounding children with SEN, the issue is not resolved.

Clayton’s work highlight the internal struggles of the children, and equally the battles being faced by the adults in their lives who could make a difference if only they had the correct funding, time and information.