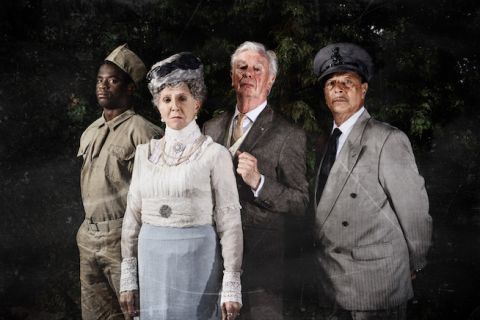 In a clearing in an English birch wood in 1943, an elderly widow, her Jamaican chauffeur and an old friend are looking forward to a leisurely picnic and a quiet afternoon. The elderly lady, it turns out, is Queen Mary, the wife of King George V. The old friend is Ernest Thesiger, an aging actor noted for stealing the show with a series of camp cameo roles.

Before tea is served, Queen Mary asks her chauffeur if she could try a shot of vodka; she wants to know what quality the drink possesses that could drive men to massacre a royal family. It has been twenty-five years since her cousins, the Romanovs were assassinated, their bodies buried in a birch wood.

The idle banter and cosy conversation of this little group is shattered when a black American soldier bounds into the clearing, wild-eyed and brandishing a weapon, like a bloodied messenger in a Greek tragedy. Where has he come from, and, more importantly, where is he going?

Nerves are calmed, and the stranger is invited to explain himself. The story he brings allows the others to tell theirs. It gradually emerges that they all see themselves as unworthy survivors, in one way or another; they have escaped the fate that has claimed the lives of people close to them, people in whose shoes they might so easily have been, people they might perhaps have saved, had they had the power, or the courage, to act. Now the young GI must choose his path, make his choice. But, in the long run, will it make any difference?

Revenants is not ground-breaking or experimental drama; it is a very fine piece of conventional theatre which, although perhaps more than a little contrived, is a highly engaging and thought-provoking work, beautifully performed. Of particular note is the magisterial performance of Nichola McAuliffe as Queen Mary whose mastery of the House of Windsor accent and demeanour is uncanny. Her contribution alone makes Revenants an unmissable experience.