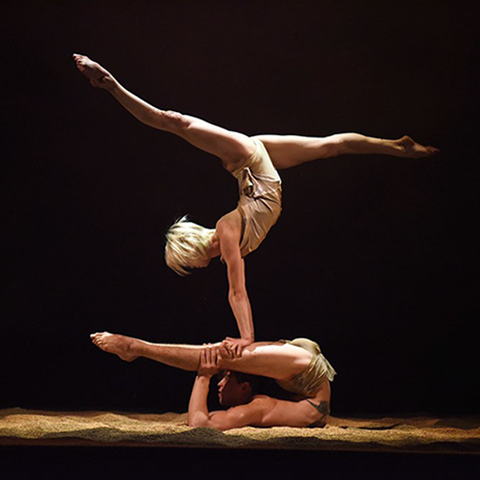 Any definition of ‘circus’ is surely inadequate to describe what it is Recirquel do when they perform, and with their world premiere of My Land there is everything to wonder at.

From dust are we made, and our land shapes and defines us. This is achingly apparent within this enthralling hour of dance, physical theatre and circus, translated through the medium of rust coloured, sandy earth. The stage is cloaked in it; the performers dance with it; they delight and dare and bathe and fight in it, and with their physical connection with it, so it begins to clothe them.

Recirquel take us back to our primeval origins, our will to prove and desire to struggle. The concept is transporting and the execution phenomenal, driving deep into the subconscious. There emerges an origin story and development, beginning with the single self, progressing to a duet of internal exploration and struggle, leading into competition and ultimate combat.

All these ideas and emotional threads are executed with excruciating precision and exquisite beauty by the company. The single woman embodies the earth goddess concept, creating a sense of the sacred and overseeing and testing the six men who all seek to make a mark. Never has juggling been more intense, or a freestanding ladder set felt more like a fight to the death. The show is incredibly evocative and ancient, and feels both indigenous and invasive at the same time.

My Land is a mystical show that transcends the bands of language and trusts itself instead to the language of light and sense and sound, uncovering an urge, a need to look within and without.