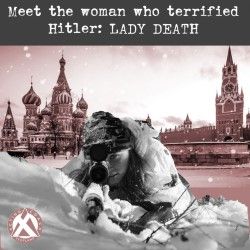 I Sniper is the story of Lyudmila Pavlichenko, deadliest of all the Soviet snipers of World War Two, with more than three hundred kills to her name. Remarkably, she was one of more than two thousand female snipers in the Red Army; her remarkable success made her a truly heroic figure, but the legend of “Lady Death” was only one story among many. Perhaps for this reason, her story in this performance is told through many voices, and it might better be called “We Snipers.”

The gold standard for this kind of storytelling has to be Henry Naylor’s outstanding Angel - performed on the Fringe in 2016 - where a single, powerful female voice tells a story with close parallels to Lyudmila’s with courage, pathos and humour.

I Sniper would perhaps have been more successful if the production had focussed on a strong, central lead with just one or two other characters. Instead, what we mostly get in this performance is a paragraph of exposition delivered by one actor, before another pops up to pick up the baton and deliver another. This fragmentation of the narrative – driven perhaps by a desire to let everyone have a turn – makes it difficult for a clearly-defined character to emerge. Several of the performers had more than enough acting ability to take on a leading role.

The spoken narrative is supplemented by a series of dramatic scenes illustrating key moments in Lyudmila’s life. There is love and loss, injury and recovery and finally recognition and fame.

The story itself is remarkable and very interesting, it is well told, and the audience is engaged throughout. But when we are finally asked to honour Lyudmila and her many colleagues, we have not perhaps been given quite enough to care about the character and her journey as much as we should.