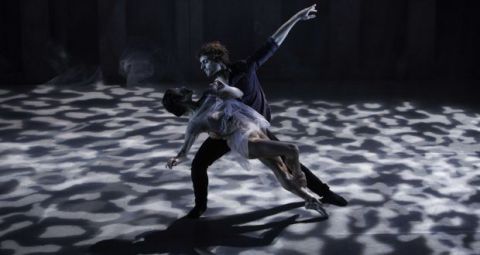 Ballet Ireland present a modern retelling of the classical ballet Giselle in the first ever full-length ballet to be seen at the Edinburgh Fringe.

When Giselle (Ryoko Yagyu) falls in love with an engaged man, he lover Albrecht (Rodolfo Saraiva) is torn between his passion and the reality of his duty as a fiancé. Once the truth of his engagement is revealed, Giselle is bereft, and dies of a broken heart – or as in this retelling, jealousy rears its ugly head and actual murder is on the cards. Originally the lovers who are kept apart by class are brought up to the 21st century by ethnical casting that presents the idea that the lovers are each from a different side of the tracks – the visceral staging with its concrete walls and graffiti supports this idea of a modern kind of forbidden romance, which of course ends in disaster. Albrecht’s fiancé Bathilde (Ana Enriquez-Gonzalez) takes an active role in Giselle’s demise, and an entire section set in the police station is visually superb and a refreshing reminder of what a wonderful medium ballet is.

The second half, much more sombre, gothic and dreamlike, tries to marry the story of the ballet with this modern adaptation, and only partially succeeds. There is too large a gap between the hotpant-wearing teens hanging out on the streets of Act I and the vampirish, phantom funeral and subsequent rising of the Wilis of Act II for it to be seamless. The attempted seduction and capture of Albrecht by the supernatural Wilis goes on a wee bit past its best.

Having said that, the look of it is beautiful, and Act I succeeds in bringing the classic story into the present. The pas de deux (or is it a solo?) between Albrecht and Giselle’s dead body is fantastic storytelling and visually very moving. Although if you want to be moved, Seu Kim’s portrayal of Hilarion steals the show as Giselle’s tortured lover, excluded from her affections but promising ‘Where she goes, he follows.’

There is a higher mime-to-dance ratio in Act I than you may expect, and it seems that the ideas there are more solid than the execution; but as the ballet progresses it becomes more comfortable in what it is doing, and there are some really stand out moments that will be enjoyed by audiences, I am sure, for a long time.