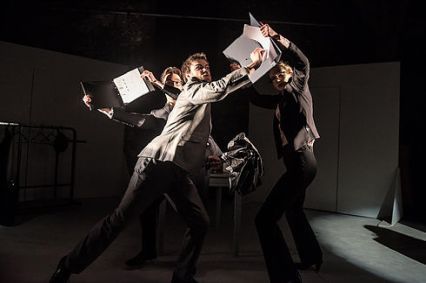 Not so long ago, in the not so distant City of London it was the dawn of an age of prosperity; battles were won over never ending riches – but in times of crisis people search for meaning. Who is to blame, God or greed?

These are not normal times. It’s September 2008 and the financial world is in freefall. At the Manning Corp brokerage Sally is looking to shake things up and save the sinking ship by replacing laid off workers. The new recruits will need charm, ruthlessness and the ability to sell.

Selling himself at interview is Johnny. How much does he love money? “It’s everything thing I want and I don’t want a percentage. I want the whole fucking thing”. Along with the other new intake Sophie, he is thrust into the pit of trading along with somewhat jaded colleagues. Mike is following the family business and, risk adverse, is not ready to “swim with the sharks”. Self-confident Anna is just getting on with it, but as a woman feels interrupted and put down.

Running beneath the numbers is politics, with everything from the decisions made in Parliament to relationships with the EU touching all they do.

With a Director’s post rumoured to be in the offing the new-starts are keen to charm and impress, no more so than Johnny who pitches a seemingly crazy idea to buy into some toxic markets cheaply and sell parts off to long term investors. His methods in doing so demonstrates another of those key attributes – ruthlessness.

Another day brings another dollar and it looks as if the plan is working, bankrolling a hedonistic lifestyle once more. One slip can lead to downfall however, when you want it all there is just never enough money and some things come at a great cost.

The play takes all the usual office drama while raising the share of humorous moments, tensions and politics. It gives itself a bonus in slickly performed movement, catching all the cut and thrust as they hit the phones and the folders fly. With its period setting it doesn’t say anything particularly current or new, and there isn’t much time to delve beyond the most basic motivations of the characters. The telling though is polished with great performances and high production values.

It ably sells itself as smart and sexy theatre.