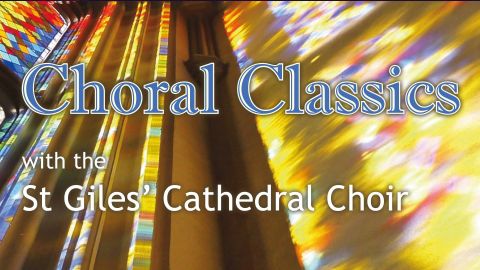 St Giles’ Cathedral Choir, whose profile and prominence has been ever increasing under the direction of Michael Harris, enthralled this evening’s audience with a captivating programme of choral favourites.

It began with a modern and rousing setting of Psalm 104; this version, by Jonathan Dove, was dramatic and dazzling in its excitement and intensity, the organ filling the cavernous Cathedral with its resounding and invigorating tones.

We then heard, perhaps unexpectedly in a concert entitled “Choral Classics”, a modern organ-only work, ‘Elegy’, by Paul Spicer. Mozart’s ‘Spaurmesse’ and Haydn’s ‘The Heavens are Telling’ provided the more traditional elements of the first half – two well-known works well within the capabilities of most cathedral choirs, and here confidently and competently performed; the difference in effect provided by the accompanying modern Rieger organ was notable.

Although this was not quite a recital of two halves, things were definitely notched up a gear after the interlude. The ‘Five Spirituals’ of Michael Tippet come from his secular oratorio ‘A Child of our Time’; they function in much the same way as the Bach chorales – though for Tippett, the spirituals held the broader appeal of being able to powerfully speak of the sheer universality of human emotion. Thus we find in the selection of the Spirituals an attempt to give voice to such weighty issues as freedom, oppression and reconciliation, subjects important to those of all faiths – but also none . The polytropic musical compositions of Tippett were brilliantly executed by the Choir, and were sung with an energy and vibrancy that was inspiring; it is interesting, and perhaps not surprising, that the Spirituals’ simpler melodies are finding their way into more and more modern-day congregational hymn books, testifying to their innate popularity and appeal.

The breath-taking conclusion to the programme was Parry’s well-known and much-loved ‘Blest Pair of Sirens’. Familiar to many from the Last Night of the Proms, and also the wedding of the Duke and Duchess of Cambridge, this piece is anyway a firm choral classic, and its performance here was ethereal and exhilarating, sung with flair and finesse.

Throughout the evening Michael Harris punctuated the programme with brief commentaries on the upcoming pieces; this was really helpful and appropriate – often at recitals one finds that these interjections can be too long or overly historical, but here Harris got the approach just right, and held the audience’s attention. The performance finished at 9.22pm.