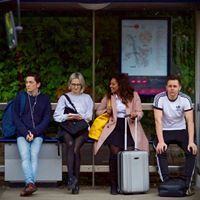 How often have you waited for a bus and speculated about your fellow travellers and wondered where they are going and what is their reason for travel? If you are from Edinburgh, you would leave it at that, but in other cities in other places you might try to engage your fellow travellers in conversation - that’s why we have the weather we have in this country!

This musical is set in London, notorious for ignoring people, and the four characters at the bus stop are almost forced to interact by a gay woman who is obsessed by upcoming exams and suffers extreme stress.

Her first ‘victim’ is a gay dancer who also has mental health issues and suffers from agoraphobia. The other male has been brought up in care and has tackled taunts about his weight by taking to the gym where he has enhanced his muscle gain by steroids. Last of the travellers is a black pregnant lawyer who has coped with a demanding career by becoming an alcoholic.

The music is delivered at full force making sure that you understand the angst that all have suffered.

It is cleverly constructed with most of the stories having a tragic ending and an alternative one based on them getting help.

The four performers, supported by the band, are all excellent. If there is a drawback, it's that it's slightly long, as each character has to have their spot, in turn, and it is quite hard work listening to the message.

Worth it, but hard work!