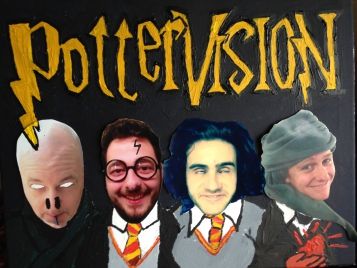 Lots of wigs, lots of lots of laughs. Lukas Kirby and Tom Lawrinson bring you the Harry Potter parody of your dreams! Witness a ridiculously re-enacted Harry Potter and the Philosopher's Stone in 60 minutes. (It’s honestly surreal to think that over twenty years ago Harry Potter was just an imagining in the mind of a local Edinburgh resident-- now there’s an entire parody show about the series set on a club off of the street that inspired Diagon Alley (ehhem, Victoria St. for all the muggles out there.))

Highlights of the hilarity performed by these two:
*****Kirby's Snape impression
**** Professor Quirrell enactment
***2-minute rendition of Harry Potter and the Chamber of Secrets

Not for the easily offended, as there are multiple cutaways to Lawrinson's alleged "rude version", complete with references to 9/11, ISIS, Harambe, and Osama Bin Laden. But! They all work! It’s genuinely funny, not just offensive.

Could do with a few less Hagrid’s bum jokes, but still a delight. As these two shrewdly describe, Pottervision is “suitable for the most casual Potter fan, but engaging enough for the most avid Squib.” I was cackling like the witch I wish I were. Long live absurd and packed-to-the-brim-with-punters Pottervision !