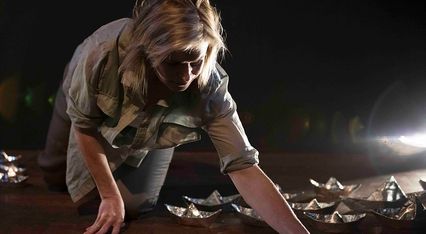 “There are two things to know about me. I am a fresh water person, not a beach person, and I am good with maps.”

So states our adventurer as she waits for a boat up the Rio Negro, into the heart of the Amazon. In her mind the boat is a steamer approaching with a hiss and thump, like that from Conrad’s Nostromo. A sucker for maps who always planned to be an explorer, her images of travel are coloured by her reading; something inspired in childhood by her father.

He would say “There is no here without there, no world without a map. Sometimes they guide you, sometimes they transport you”. Up until now the Amazon has been an abstraction, viewed of TV, but now the journey is planned.

This is a monologue blending biography and almost nerdy lecture. She is intellectually adventurous. We learn of the rubber trade, failed Fordlandia, vainglorious attempts to make a mark on the land. Dragons and mythological sea creatures may have disappeared from charts, the blanks filled in by Google Maps, travel less an experience of otherness, but real life is not like stories.

A detour is required to her parents. Her father is ill, a degenerative condition that sees his speech take wrong turns. Maps tell us what is beyond and the way back – but it looks like a journey into the unknown.

There are still things to be discovered.

A fine performance, delivered from the heart in a way that seems authentically autobiographical. The languid meandering of the often lyrical script flows with the soundscape and music. Only occasionally do the words feel a little too flowery even for its nature or does a miss-step seem to be taken.

High on the wall of the theatre space can be found in gilt letters “Behold how good and how pleasant a thing …” How apt.