A Night at the Musicals, Greenside @ Nicolson Square, Review 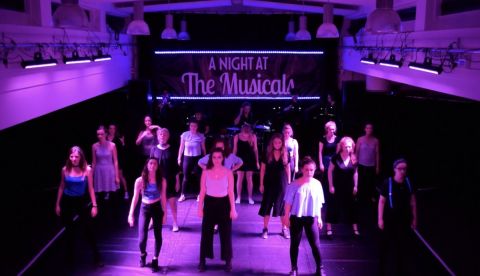 University of Exeter Spotlights are a show based choir, but forget any ideas of a sedate evening at the musicals. This is a high octane show lasting 50 minutes of big ensemble numbers that leaves audience and cast gasping for breath.

Drawing from some of the newer productions on Broadway and in the West End, the large cast sing and dance their way through big numbers from Hamilton, Aladdin, Wicked, Frozen and the Book of Mormon.

Supported by an excellent band, the cast ensure that the audience on all three sides of the theatre get to see all the performers.

One of the inconsistencies is that the males are all in black with one guy with a great waistcoat, but the girls are dressed in a variety of rehearsal clothes and maybe use of their promotional t-shirts might have been an option.

One of the issues for me was the lack of the occasional solo to give the audience some variety from the very in-your-face delivery of the ensemble numbers.

The choreography was very good and the tap dancing was excellent and all too brief. Although there was a nod to ‘Grease’ maybe Fringe-goers need to be aware that this is a modern show without too many 20th century offerings.

The cast enjoy themselves and this translates to an appreciative audience.