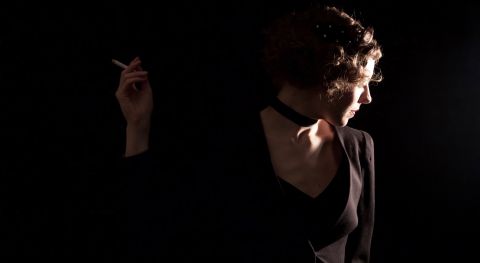 Although listed under Theatre and described as an “electrifying cabaret play,” there’s little sense of theatricality in this overlong concert of songs. Upstairs at Assembly Hall, the rows of seats are crammed into the cramped Bailie room, which does little to create the ambience of what is meant to be a 1930s Parisian nightclub.

With a curtain backdrop on the narrow platform, a pianist plays a few bluesy tunes on the keyboard, then repeats a refrain, before a young lady rushes in and steps onto the stage. She wears a neat black office suit, her hair curled in a pretty perm and pours herself a tipple from a bottle of Scotch: “ Cheers Dears!” as she raises her glass. “ I expect you are thinking, What’s a nice girl like me doing in place like this?.”

This unnamed American singer is played by Kelly Burke - although I had to find this out, as there’s no programme about the cast and she does not introduce herself; she refers to the pianist as “magic fingers.”

Our heroine is a blend of Sally Bowles and Holly Golightly, who escaped to Paris in search of adventure, fame, fortune and love. We hear a few anecdotes of her arrival in town, losing her suitcase and moving into the garret apartment of a handsome young translator-writer, embracing the penniless, artistic existence of La Boheme.

But the central element to this show is an almost a non-stop showcase of twenty cabaret songs, mainly by Brecht and Weill, such as the “Alabama Song”, “I’m a Stranger Here Myself” as well as Auden’s endearing poem, “Tell Me the Truth About Love” set to music by Britten, and, sadly, just one song by Cole Porter, “Love for Sale.”

There’s no doubt that Kelly is a professional singer with a high operatic vocal range. This is totally unsuitable for these gutsy ballads which were given the deep smoky-voice nuance, and jazz rhythm treatment by Marlene Deitrich, Ute Lemper, Marianne Faithful and Diane Krall. In this show, the delivery is too sophisticated, precise and polished, especially performing in her neat Chanel style suit.

Half way through, she changes into a slinky black gown, adopting a seductive manner, sipping back the champagne. It is only now, after a powerful rendition of “Surabaya Johnny,” 45 minutes or so into the show, that a few members of the audience are moved to applaud. This speaks volumes.

“Love for Sale” unfortunately falls between two stools, being neither a play, with an authentic setting, character and narrative, nor is it a sizzling hot and sassy Cabaret of Weill/Brecht songs. It totally lacks emotional and dramatic heart.