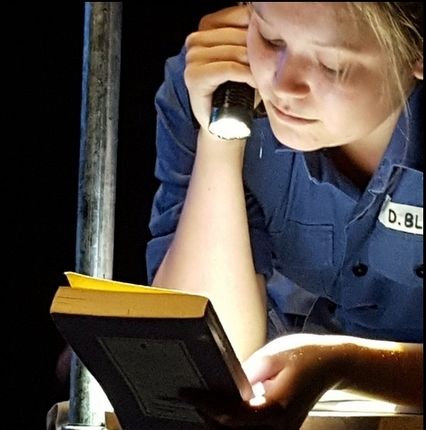 "Being set on the idea
Of getting to Atlantis,
You have discovered of course
Only the Ship of Fools is
Making the voyage this year. – W H Auden”

The crew of a Royal Navy submarine are about to cast off their land bound lives and slip beneath the waves. They take with them only tenuous links to the homes; a hot new lover; a baby, which they leave behind.

The Silent Service requires many secrets as they track the Russian nuclear submarine “Kursk” in the icy Barents Sea during war games manoeuvres.

With documentary precision we see the crew coalesce in the well-rehearsed process of diving the vessel. The play alternates between these highly believable sections, full of jargon and procedures, and the more theatrical where we see the off-duty relationships. There may be isolation but there is little privacy.

Information from the outside world is merely drip-fed in regular messages. These range from the mundane, if a little worrying, to the radio equivalent of sexting and on one occasion something potentially devastating. This compartmentalised life is well defined by the set, a minimalist structure of metal tubes that split the operations, crew and captain’s quarters; the narrow spaces between “doors” giving a claustrophobic air. Some bottled up tensions are sure to need released.

While other promenade productions of the play have sought to put the audience at the heart of the action, this more stylised approach has us watching the watchers. It achieves a sense of isolation rather than immersion.

The war games play out as the commander sits before a chess board, the anachronistically old trappings of her cabin speaking of disciplined tradition. Any misgivings also require to remain submerged.

When disaster strikes the Kursk, the crew may have all the potency in the world at their control, but are they ultimately powerless? After all, they are not even there.

This is a nicely crafted, polished and deeply impressive piece of theatre. It requires a steely sense of realism, and it really delivers with striking set, lighting and sound design. Only the “tin can” periscope feels a little underwhelming.

Performances are excellent throughout. There is one bit of Star Trek style leaning over the instrument panels which could be omitted. The story itself is a little thin and lacks an emotional punch (even with its sub-plot), leaving it absorbing but not engaging. It does, however, do well in evoking feelings of loss and above all of camaraderie.

It seems that only the deep is the enemy; as the Russian Navy’s march has it “The Crew – One Family”.