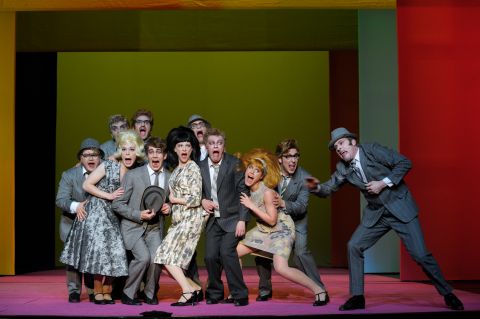 A seemingly nervous conductor squeezes himself along the front row of the auditorium before falling into the orchestra pit.

Perhaps his apprehension can be attributed to the fact that we are about to see what was considered an unstageable work. The play is based on a shape poem by Swiss artist Dieter Roth, 176 pages with just one word; murmel.

His skittishness seems shared by the actor who opens the piece with a rhythmic repetition of the word. He fiddles with his tie and fights an urge to throw in some movement, as if his solo vocal performance is not enough.

He need not worry as soon he is joined by a cast with Mad Men attire and huge hair. These 60’s swingers give us every possible rendition of the syllables, from chants to operatic to a crooning blend of Burt Bacharach meets Austin Powers. They parade down the central red curtain on the stage as if on a catwalk, displaying their individual eccentricities, forming a gurning tableaux, the artifice of which is revealed when their faces drop into momentary repose. Pushed to the limit they tangle with a microphone and regularly tumble into the orchestra pit.

The language becomes just another part of the performance and freed from meaning it can be melodic, rhythmic, comic. Roth was part of the Fluxus movement, in the spirit of the earlier Dadaists, who took stabs at the seriousness of modern art. It was about combinations of movement, words, sounds. And fun, intended to be grasped by everyone not just the dilettantes.

There are times when there seems to be attempts to impose order. Cast members usher their colleagues into line or encourage them to follow a lead. Even the set, a homage to artist Josef Albers’ disciplined nested boxes, seems to try to tame them. Bright coloured panels make seismic shifts, shrink and reposition the action. All these attempts are gloriously subverted in a fresh round of pratfalls.

Having dispensed with theatre there is a change to ballet, modern interpretive dance and mime, with similarity chaotic choreography before a uniform orchestra of melodica players present a farcical finale.

Its all beautifully judged with lovely detail amidst the anarchy and in this EIF setting almost feels like a guilty pleasure.

As an apparently relieved conductor climbs back out of the pit, he seems surprised to have pulled it off. No more so than when, as the cast teeters on the edge of the pit to take another curtain call, the audience shouts back in unison,
Murmel Murmel !