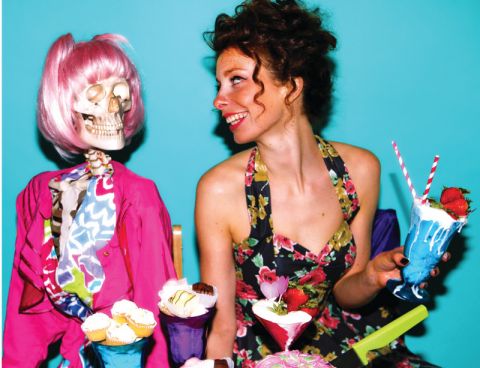 Welcome to Jill’s cookery show, a world where butter wouldn’t melt, a place where food is the centre of our lives.

After a hugely successful run at the Edinburgh Festival Fringe 2014, Helen Duff’s ‘Vanity Bites Back’ has returned in all its glory to the Gilded Balloon Study (inside the Pleasance Dome).

With a sprinkle of glitter, many a digestive and a thick coating of butter Jill guides the audience through parts of her life as she cooks up a storm (or a cheesecake in this case). Hugely comical, the show is light-hearted, but comes with a meaning deeper than just cooking and clowning.

As an audience member prepare to have the fourth wall broken as Jill hands out digestives, not without a witty remark about the receiver. From here on it remains interactive as guessing games are played and advice is requested on how best to melt butter without a microwave.

Stories are told through the characters of butter and biscuit, advert breaks take the form of a more serious pause from the alarming cheeriness and slowly but surely the cheesecake takes shape and the story unfolds.

Duff is witty, endearing and yet slightly terrifying as the overly enthusiastic cookery show host. Oozing with a pinch of Bobby Baker, a sprinkle of clowning and a large dollop of just Jill, it is a recipe to be proud of.

Her comic timing is perfection and the ability to adapt to any audience response ensures the show is hilarious. The writing is topical and cleverly incorporates the serious subject of anorexia within the façade of the cookery show without it becoming too heavy.

The ending although unexpected, bleeds throughout the piece so smoothly it’s hard to comprehend that you hadn’t noticed the hints there all along.

It is no surprise that this show was nominated for a Fringe First, it is an absolutely endearing mix of comedy, theatre and cooking and if audience’s still need an extra reason to go and see it, the free biscuits should surely close the deal.