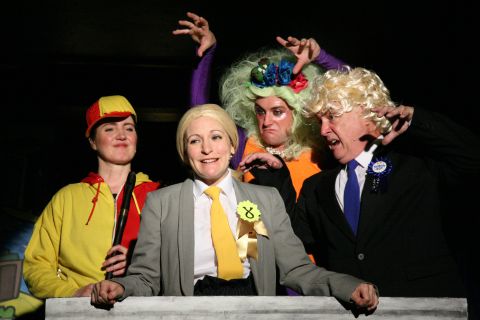 Òran Mór brings their weel kent Summer Panto to the Fringe. Oh yes they did! And full of bright, brash Glasgow cheek and swagger it is too.

The parable of the Pied Piper of Hamlyn is transferred to a rat infested City State run by posh blonde haired Mayor (Jimmy Chisholm). Ruling, as the opening song says, for Five More Years, this peroxide egoist is forced to turn to a permanently pissed piper saviour who bides in that part of post referendum Scotland called Hamilton. On the promise of a lifetime supply of Buckie, and the hand of the Mayor’s manly but Beautiful Daughter (Paul James Corrigan), the Piper (Annie Grace) takes his magic skills down south and leads the vermin to a watery grave. His revenge on the greedy leaders involves luring the most valued folk in their lives away. And no, it’s not their children. Revenge is sweet and comes in the form of union joining and devolution!

The four stalwarts inhabit the stage as gallus as you like with a club style singing Pearly King and Queen, a bureaucrat who can speaking ‘Scotlish’at a drop of his bowler hat, a big bruising drag act and, bang up to date, a salute to Westminster’s youngest MP who appears as Goldilocks! This cast can deal with any equally gallus shericking that might come from the audience, so be warned!

True Scottish panto style is the order of the day with Paul James Corrigan’s Dame looking like a scary female Popeye, and deliberately makeshift cartoonish London/Hamilton scenes as the backdrop. Join in at the end after a big shout to ‘wind down the blind’ with the words of a cod Scots anthem.

This is an interactive, rude and daft bit of topical piss taking but feels slightly like your favourite auntie telling a rude joke. Not for the weans but definitely for a Scottish audience!

The Pie-Eyed Piper of Hamilton is dedicated to the late Dave MacLennan who invented the concept of a Glasgow Summer Panto.