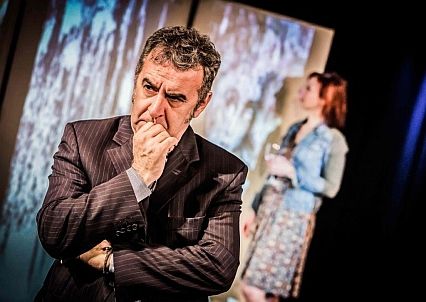 Peppermint Muse is a theatre company staging classic adaptations and exciting new work. “Lavender Junction”, a poetic monologue about a woman’s true life experience in the British Raj, was performed at the Fringe 2014, and has since been on a UK tour.

“The Colours of Kenny Roach” is an intimate, emotional psychological drama about Kenny, a talented, yet mentally tortured artist. He seems to be gradually losing his creative muse despite the love and encouragement of his wife, Lisa.

This premiere play is by Rebecca Russell, an award winning poet, performer and writer for stage and radio.*

The spacious stage is simply set with two chairs, a bench seat and a large screen. Slides, images and paintings are presented as a scenic backdrop as we move from University lecture hall to art galleries, railway station and the Roach’s home.

To enhance his mediocre income, Kenny teaches History of Art and the play begins with a question to us, the audience, as his classroom of students. What is Art?, he asks. Illustrations of plain black Rothko paintings, Miro’s colourful patterns and Warhol’s Marilyn’s are shown. With abstract, Pop Art like this, it appears that “Art is what you can get away with. Life is Art” he concludes.

The Art world of personal comment and professional critique can unfortunately damage an artist’s reputation. His own work has been described as “Juvenile” and “Kenny Roach cannot paint fingers.”

In a brilliantly humorous scene, he then demonstrates that many painters cannot draw fingers – just look at Picasso’s attempt with his “blue sausages!”, he retorts angrily. The ever-patient Lisa points out a recent review which describes his work as having “exquisite presumption”. Your work is “Exquisite”, she repeats, but he just sees this phrase as negative.

And so signs of cracks in the canvas of their relationship are beginning to show.

The Tony Award-winning play, ART by Yasmina Reza (1997), focuses on the meaning of art as well as the friendship between the man who bought the painting and his two friends who come to view it.

In similar vein, “The Colours of Kenny Roach” is an astute portrait of Kenny and Lisa’s marriage as well as an illuminating exploration of artistic talent and creativity. A series of superlative figurative and still life images depicting their artwork on screen brings authenticity to the drama.

John Stenhouse – with the looks and actorly manner of Ken Stott - plays Kenny with masterly precision, shifting from a confident, debonair chap, to a hard drinking, boorish man. (Coincidentally the original London cast of Art was Albert Finney, Tom Courtenay and Ken Stott!).

As his wife Lisa, the elegantly stylish, Lisa Stenhouse, portrays a calm, cultured woman, trying her best to maintain control of her life. The brittle emotional strain between the couple is beautifully expressed with such subtle nuances - a brief look, touch and gesture.

The graceful evocation of their relationship (which takes place over a few years) is reminiscent of Pinter’s “Betrayal”, except the narrative here is linear, not a reverse time-scale.

Rich in satirical wit, this is a crisply written, cool and classy play; performed with a natural, engaging ease it oozes with a Pinteresque sense of sexual tension and dramatic intrigue. Bravo!

(*A collection of Rebecca Russell’s one-act plays was recently published by Methuen).