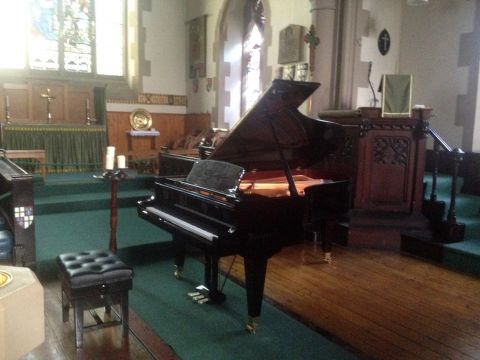 Peter Bream is one of Edinburgh's celebrated pianists and full-time piano teachers. For several years now he has performed works by Erik Satie in the Fringe - but at St Cecilia's. His fans followed him this year to St Vincent's which is celebrating its first year as a Fringe Venue. Peter was playing on a brand new Bosendorfer 214 grand piano which, in the run-up to the concert, had taken a few days of being run-in and fit for his use.

The audience will have known that Frenchman Satie, born in 1866 and died in 1925, was at least eccentric and took several guises over the years. He was in the company of many of France's well known composers including Claude Debussy, the young Maurice Ravel - whereas Camille Saint-Saëns blocked his membership of the Académie Française.

The concert was of three works, played with the shortest break between them and a noticeably attentive audience throughout. Gnossiennes was a term coined by Satie alluding to spiritual mysteries and music to be played largely free time. Peter Bream played No 6 described by Satie as "with conviction and with a rigorous sadness". 3 Sarabandes followed. Dances Gothiques was composed during Satie's obsession with an artist's model, his only known relationship, to give him peace of mind. Within six months she had moved on leaving him broken-hearted.

This was a specialist concert by a talented pianist. The audience looked more than satisfied as they came away from St Vincent's - such an appropriate venue.