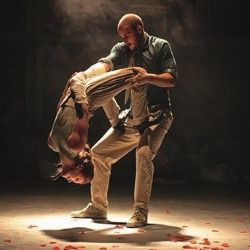 Dolls: mini figures made for children to enhance their imagination and to play with life. Playing with life is exactly what Cirk La Putyka do in their dark, contemporary circus performance, aptly named, Dolls .

They delve deeply into a surreal world of dolls stuck in a decaying doll’s house, unable to escape. The dolls represent ideals and are used to explore relationships between guardians, friends and lovers.

We are made to wonder if this is a fixation of a child’s imagination: the stage is never bare, which feeds our minds constantly with thoughts of human connection and interaction.

Some of the narrative is not entirely clear, due perhaps to the busy stage which makes it difficult to focus on just one situation at a time.

Nonetheless, the stage is visually stunning, with design from Jakub Kopecký who creates a magnified doll’s house of post-apocalyptic crumbling ruins - a comment on our society and our inability to connect on a human level due to our obsession over consumer objects. He cleverly creates a harsh, isolating and cold set which immediately transports us to the desolate world of the dolls.

The "dolls" themselves, Bellina Sörensson, Josa Kölbel, Coline Mazurek, Valentin Verdure and Iesu Escalante, are highly technical performers who display clean and crisp circus tricks for the whole performance. From start to finish not one performer leaves the stage: they are constantly in action filling our imagination.

At times, however, it is difficult to hear exactly what they say and some of the sequences are slightly repetitive and lacking in narrative.

Rostislav Novák originated the idea and directs the performers who create innovative physical images throughout. One image in particular that should be commended is when one performer is tied up as a human puppet and the others control him. This is a fast-paced sequence with difficult intricate moments in which the performers intertwine in and out of each other without tangling themselves together. This is a highly impressive section and creates a beautiful thought–provoking picture.

Dolls is a picturesque performance which hints at society’s run-down, rotting and bleak bigger picture.