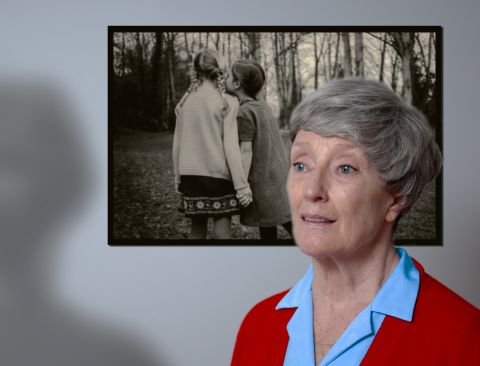 A touching tale of female love.
Who among us women hasn’t held hands, linked arms and shared beds and secrets with best pals in days gone by? The idea of Sapphic love was pretty much unknown then and anyone with feelings for someone of the same sex could have been in trouble.

Judith Paris takes the stage as Rita to tell her story of her 60 year friendship with Angie. From playful schoolgirls to developing adolescents; from motherhood to widowhood and everything in between this friendship stays the course. Where this one differs is that only Angie experiences the birth of the child and the death of the husband in reality. Rita only experiences these vicariously, albeit at what must seem to Angie’s husband Bill, a very close distance. Was she around because he strayed or did he stray because she was around? Princess Diana was not the only one with three people in her marriage. Rita is her cushion when Angie falls; her companion when Bill strays; her comfort in times of grief. When widowhood comes, their relationship takes a very natural course at a time when shame and secrecy are no longer considerations.

This one woman play is both nicely performed and sensitively written in the style of an Alan Bennett Talking Heads but without his singular dry observations. This is Rita’s story and told very much from Rita’s perspective. It is delivered through a monologue from Judith Paris where she stays in the character of Rita throughout, using items as metaphors for the person she speaks about - a bunnet for Bill; a pipe for her Dad; a compact for her Mum; a wee jacket for Angie’s boy.

This is an honest and touching account of a lifelong friendship and a lasting love that finally dared to speak its true name even in the midst of crinolined china ornaments!
Aug 6-16, 18-31 at 15.10pm Age recommend 14+