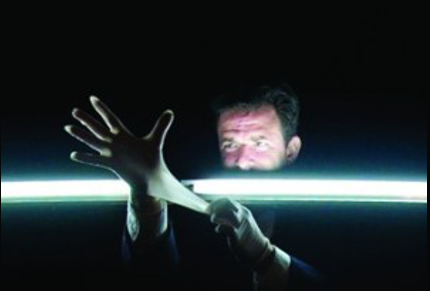 Crossing a border can be an interesting experience – depending on the country you’re visiting – and in this one-man show Thaddeus Phillips recounts his memories of his border crossings throughout the globe. Although some of the country borders have political resonances - such as Cuba, Palestine, Croatia and others – the monologue doesn’t focus on these issues but rather on individuals and a variety of idiosyncratic officials Phillips has met en route at border crossroads.

With sound effects, a simple set – two tables, a chair and a lighting strip – and his versatile acting skills, we are transported to other continents. He performs at a frenetic pace, using various antics, and his characterisations of the individuals he has to deal with at the borders are at times very humorous. And he uses the space, creating different cultural environments, very effectively. Generally, it is an entertaining show, although it could have been edited to minimise the effect of over indulgence.