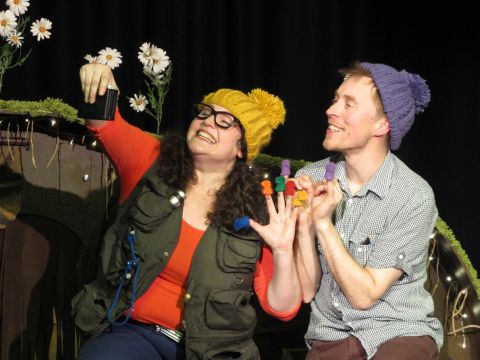 The Worm is an endearing eco drama for 3-7 year-olds that offers some friendly fun while being gently informative.

The stage was set with a grassy bank at its centre and an interesting array of musical instruments assembled to one side. Wilma popped up from behind the bank looking suitably batty and boffin-like, with huge spectacles, a colourful woolly hat and brandishing a large magnifying glass.

Wilma is clever and very interested in bugs and beasties, but is especially keen to observe some worm-life. William, her musical friend who was also kitted out in a woolly hat and welly boots, happily agreed to join her as she waited for the rain to come, hoping that this might bring some worms up from underground. It was not long before they decided to find worms by tunnelling beneath the earth, the grass peeling away from the bank to reveal wormy corridors, and rooms full of tiny furniture.

Telling the tale of the worms they met using dialogue, song and clever sound effects made live by William and his instruments, they also managed to slip in more than a few fascinating facts. We learnt that: worms have five hearts; they eat our organic waste; their poo is nutritious food for plants and without worms plants couldn’t root and grow.

After the performance had finished, Wilma and William brought out a real wormery for the children to take a close look at. We then learnt that apple cores, tea bags and egg shells were good worm food, but that milk, citrus fruit, crisps and tomatoes (surprisingly!) were not. Using this worm poo/compost, William had grown tomatoes in a drum and Wilma had grown strawberries in an old pair of wellies. These plants were obviously thriving, and the children gleefully collected the seed packets that were handed out as they left, equipped also with some good ideas about how to care for them.

This was a smashing wee show that just maybe planted the seeds from which a new generation of eco-warriors will grow.