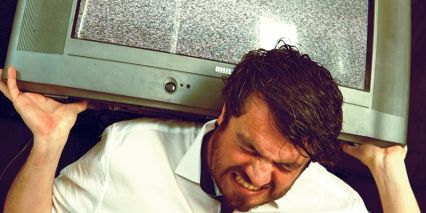 Apophenia: the tendency to perceive a connection or meaningful pattern between unrelated or random things - Merriam-Webster Dictionary.

As we enter the theatre, Dark Side of the Rainbow is playing on a TV. This is a mash-up of The Wizard of Oz film played with the soundtrack of Pink Floyd’s Dark Side of the Moon and purports to show synchronicity between the images and the lyrics.

We are hard-wired for pattern; learn a new word and suddenly it’s everywhere, end a relationship and the radio will only play breakup songs. Coincidence or something more?

In a mix of lecture, film, poetry and dramatised diary, Ross Sutherland views pieces of his life through frames of an old inherited video cassette recording. It’s a tape that he and his granddad recorded during the school holidays in a rather slap-dash method and now holds only partial programmes. Along side this are recollections of a scaring, scarring childhood trip to the cinema to see Ghostbusters and to the museum to look at mummies.

He matches poetic spoken word and actions to a repeated section of the Fresh Prince of Bel-Air, a sort of hip-hop twilight zone. The Crystal Maze starts to play games with the nature of time and the possibility of life beyond the grave.

From the fragments something more substantial emerges, a tale of struggling to come to terms with loss, forgiving mistakes and learning to love demons. The TV becomes a crystal ball and the video, an ephemeral format now almost obsolete, becomes comparable to our own over-written memories, mixing truth, images, books - degrading to a point where we too might be lost to the world.

It’s a cleverly built and directed piece that sneaks up on you, taking some time to reach a sort of synchronicity where Sutherland’s words and actions click with the images. It becomes spellbinding in parts as the edges blur between performance and something that is almost confessional. It’s perhaps a testament to its success in getting us to see patterns in the random that there is a feeling that Sutherland could eke out yet more magnetic material.