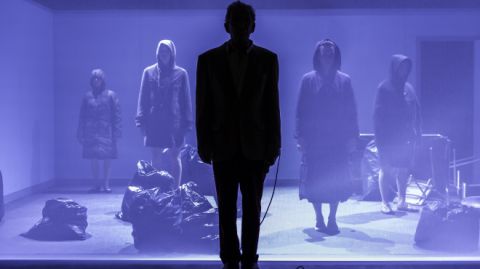 Distinguished Irish company Dead Centre, under the direction of Bush Moukarzel and Ben Kidd, present a visceral exploration of the difficulty human beings have at understanding one another, with reflections on how judgement is interpretation in a strikingly sinister production.

LIPPY is inspired by the true story of the mysterious case of The Mulrooneys. Four women – an elderly aunt and her three nieces – barricaded themselves into a house in Leixlip, near Dublin in 2000 and starved themselves to death in what seemed to be a suicide pact. Little is known about why they did it.

A piece of two halves, we begin with a jovial, tongue-in-cheek post show Q&A, with Bush Moukarzel as the interviewer playing a sycophantic parody of theatre producer cliché, and Dan Reardon as the worn out actor who is a trained lip reader and worked with the police on the Mulrooney case, to decipher some CCTV footage.

They discuss the skill of lip reading in-depth, with acute and comic observations through YouTube clips – highlighting throughout that lip reading is not a conclusive ability but rather a nuanced and inexact art, as mouth movements can be the same for certain words.

This outwardly typical, comedic set-up is peppered with moments of surreal, suspended action, which builds into an assault on the senses as we leave the seemingly "normal" and spiral closer into the events in question, entering the Mulrooney household through the eyes of Reardon, who remains a compassionate witness, echoing and reminding how defective his conclusions may be.

Flashing lights and sound eruptions echo throughout the space, with dialogue becoming fractured snippets that enlighten, confuse, distort and intrigue, sucking you into an eerie journey that challenges the notion of human comprehension. The final instalment, causing varying physical reactions amongst the audience solely focussing on lips moving on a screen, is a fantastically fractured monologue that bites at the audience, refusing to deliver a conclusive answer.

This production, rather than attempting to answer the why, instead explores it, without offering any conclusions. There is no attempt to put words into these women’s mouths but instead the audience are offered thoughtful reflections through theatrical approaches into the need for conclusions in a world of saturated meaninglessness, as well as questioning how easily communication can be distorted and individual reactions towards death.

Just like death, each audience member is left in an isolated state, contemplating and interpreting the contexts, actions, words and noises that have been put before them. This challenging production may split opinion, but regardless of whether you are a lover or loather, you will be talking about it long after leaving the theatre.